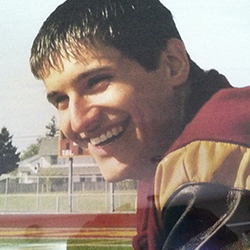 Joshua “Josh” TC Gatbunton was a gifted athlete and student attending St. Martin’s University in Lacey, Washington—on an academic and athletic scholarship—where he broke a school track record. From a young age, Josh had a deep-seated passion for running, a passion he would pursue his entire life. He loved the sport of running and could be found cheering on his teammates, making friends on the opposing team, and constantly earning the respect of coaches and trainers.

Josh was shot and killed during an attempted robbery inside his friend’s apartment. The gun that took his life was purchased illegally and without a background check. Josh’s incomplete life is represented by the running shoes he would never get to wear again after his life was taken by gun violence.